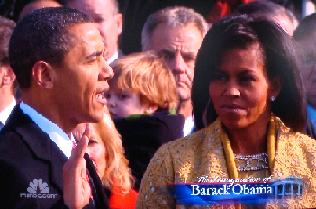 Many people are fascinated by how Barack Obama, grew up from a very unusual family background, has become the first African American to be the President of the United States. With his black father from Kenya and white mother from Kansas (they met in a Russian language class while attending University of Hawaii), Barack Obama grew up in Honolulu, and in Jakarta with his Indonesian step-father. He was Ivy League educated, a lawyer and law school professor, and ran for US president while he was still serving his first term as US Senator. His charisma and effective public speaking captivate people around the world.

To understand the analysis better, you may want to review Barack Obama’s bio at a glance first.

Analysis: Very intelligent, determined and hard-working. Was not born to wealthy or famous family, and had to endure hardship when young. Cannot sit back to relax or be taken care of.

The Life Line is long, distinct, and runs deep without breaks or circular creases. The palm area it enclosed is big.

Analysis: Strong, vital, and healthy life throughout his lifetime. Very energetic and romantic.

The Wisdom Line (aka Head Line) on his left hand has two separate lines, while his right hand has one solid line. The line ends below the ring finger, and the line is clear and distinct. For both hands, the Wisdom Line is totally separated and away from the Life Line (i.e., does not share the starting point or overlapping).

Analysis: Intelligent but does not outsmart others to create problems. Very focused and clear headed. Very decisive, fearless and audacious. Based on the “age and gender rule”, his left palm shows big learning environment changes during childhood and adolescence – referring to his move to Indonesia with his mother and step-father from age 6 to 10, and the move from Hawaii to mainland for college.

The Love Line (aka Heart Line) is long, and curves upward all the way to where the index finger and middle finger connects.

Analysis: Very rational and sensible – does not behave regrettably in the name of love. Loyal to his family – very unlikely to have extra-marital affairs. His affection and emotion is more spiritual than physical. This does explain why his speech is highly inspiring and motivating, as he speaks from his heart and has the desire to act morally and to help others.

The Career Line (aka Fate Line) is unusually distinct, straight and long. The Sun Line is not as dominant. The Money Line is not noticeable.

Analysis: Has a very successful, prominent and long career, but in comparison, will not be very wealthy. He is definitely a public servant with strong leadership, enormous fame and super power, but not a businessman to become super rich with his fame.

Or go to https://www.chinesefortunecalendar.com/ to read on Chinese horoscope for Barack Obama for analysis based on his birth date.